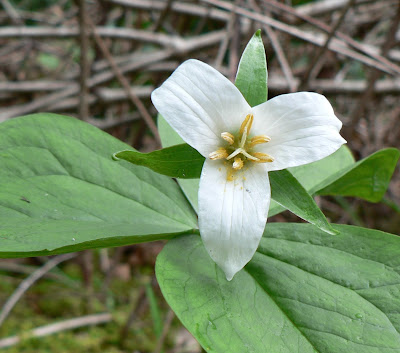 Growing up, our suburban property backed onto abandoned farmers fields, small ponds and deciduous Eastern Woodlands and this is where my naturalist inclinations first appeared. At that time it was the fauna, rarely the flora that caught my young attention and I would spend countless hours scouring the fields, finding bird nests and baby rabbits, milkweed plants hosting monarch butterflies and old coke beds riddled with snake hibernacula. I rescued a muskrat from a neighbours garage and kept it loose in my bedroom until it recovered sufficiently to bite the hand that fed it!
Every spring, small ponds reverberated with the calls of a cast of frogs, each declaring their territory and availability, almost precluding sleep. Surrounding these woodland ponds in deep, rich, moist soil were carpets of chaste white trilliums that gradually shaded to pink and rose. These quite blameless flowers inspired fear and respect as my literal childish interpretations led me to believe that even inadvertent damage to the trilliums could send me to jail. I looked but never touched these glowing woodland gems.
There is an austere beauty, nothing fussy or overblown, that adorns the classic trillium. Floral emblem of Ontario and Ohio and protected by law in several provinces and states, trilliums have leaves and flower parts in threes or multiples of threes. In its most recognizable form, the leaves and sepals are clothed in unblemished green with petals a clear white. Other species can have mottled leaves and petals that range from yellow to pink or red. Rising from two inches to two feet, it never fails to quicken the heart of a rambling nature lover.
Like many lily species, trilliums can be slow to grow from seed, taking seven to fifteen years to bloom, although some of the species more than make up for this by living to a great old age of about one hundred years. The trillium has co-evolved with ants and they have developed a remarkable relationship that ensures dispersal of trillium seeds. The seed has an oily appendage that is attractive to ants, who gladly carry it home and consume the appendage. They then toss the still viable seed onto their garbage heap where it might germinate. If you pick the flower and leaves of a plant with underground storage components, like a bulb or rhizome, you deplete it of energy reserves for the next year and it could take several years before the plant recovers sufficiently to bloom again, hence the prohibitions on picking and collection I remember from so long ago.
Overharvesting and development of woodlands has depleted many populations so that some jurisdictions have enacted laws giving protection to the species. If you find trilliums offered for sale at your local nursery, please inquire if they are nursery grown or wild collected. Resist the temptation to buy wild collected plants.
The common name, wake-robin, most likely refers to the springtime reemergence of the plant, coincident with the welcome arrival of robins. Other familiar names such as birth-root and Indian-balm hint at former medicinal uses. It was valued for its astringent and antiseptic properties that relieved birthing difficulties, eye problems and gangrene as well as its aphrodisiac qualities.
In some botanical sources the following lines from Shakespeare’s Midsummer Nights Dream have been said to describe trilliums:
Yet mark'd I where the bolt of Cupid fell:
It fell upon a little western flower,
Before milk-white, now purple with love's wound,

Although this could be an exquisite description of trilliums, they are native to North America, Japan and the Himalayans, not England or Europe, which generates a little mystery if you don’t read the rest of the poem:
And maidens call it love-in-idleness.
Love-in-idleness which could be either Viola arvensis (field pansy) or Viola tricolor (Johnny–jump-up), native to the British Isles and a more likely plant for Shakespeare to be familiar with!
Whoever decided to borrow Shakespeare’s lines to describe our North American beauties need not have bothered, trilliums with their clean and simple form and unpretentious beauty need no embellishment.