A New Series: Parks and Other Natural Locations in Metchosin

What is a park? There are almost as many ideas about the meaning and use of parks as there are people who use them. My computer dictionary defines “park” in many ways. As a noun; i) a publicly owned area of land, usually with grass, trees, paths, sports fields, playgrounds, picnic areas, and other features for recreation and relaxation; ii) an area of land reserved and managed so that it remains unspoiled, undeveloped and as natural as possible; iii) an area of privately owned land, developed to offer recreation or amusement to paying customers; iv) a sports stadium or sports field. There are quite a few other definitions relating to vehicles and I’m kind of partial to this usage of the word as a verb: to kiss and cuddle in a parked car in a quiet and secluded location. Hmm… memories.
All of us bring our perceptions of what a park should be to our own usage of a park. Do you frequent a favourite park so that your dog can have a place to run and relieve itself? Do you have children who use a park to improve their mountain biking abilities? Do you like to ride your horse through a park? Is it a place to bring your children to point out some small miracle of nature or perhaps to bring someone with whom you want to spend some time watching submarine races? There are people who use a park as an escape from a troubled home, setting up camp for days and nights at a time. How about parks as a place to exercise? A fast jog through a park can be invigorating. Parks are often used to find solace from some of life’s grief. And my favourite use; parks as repositories of our precious natural history, home to plants and animals that have lived in communities that have survived for millennia.

History
Many forces have shaped the landscape we see now. Bedrock here is composed of Metchosin Volcanics from the Carboniferous and Devonian eras. The later Jurassic period found the landscape partly replaced by batholithic intrusions (a large mass of granite or gabbro, formed deep in the Earth’s crust and forced, in a molten state, into pre-existing rock formations). Millions of years of erosion reduced this to lowland. Glaciation occurred three to four times during the last one million year period known as the Pleistocene era. During the last ice advance of 10,000-15,000 years ago, the weight of the ice submerged our area under 150-300 metres of seawater. As the ice retreated, the land gradually rose to its present level, with soils developing from morainal (glacial debris) and marine (sea) deposits.
Not a great deal is known about the pre-European cultural history of this area. From the Royal BC Museum curator Grant Keddie articles on Aboriginal Defensive Sites, it appears there were various First Nations groups who occupied locations in the Victoria area before 2000 BC. Remains of their occupation of the land can be found in the middens, cairns and defensive sites that dot our community. Archeologist Dr Darcy Mathews has recorded burial cairns in Devonian Park and surrounding areas and completed his PhD on the burial cairns found at Rocky Point on the department of National Defence property which has the greatest concentration of Coast Salish burial sites in BC.
One significant component of the Metchosin landscape, the Garry oak ecosystem, one of Canada’s three most endangered ecosystems, has been partly shaped by early First Nations inhabitants. Research has found that they would deliberately set frequent grass fires. These would reduce invasion by Douglas-firs and control the shrub growth, leaving space in meadows for camas and other edible bulbs, important food and trade items. This practice would also increase visibility of game animals.
In 1850, (Sir) James Douglas paid the Ka-ky-aakan people approximately 43 pounds 6 shillings and 8 pence worth of blankets for the rights to all of Metchosin. Section 5, a 180 acre piece of this newly acquired land, is located in an area that roughly follows the boundaries of Rocky Point Rd, Swanwick Rd, Parry Bay and a line west of Taylor Rd. In 1865 the Helgeson family began a long association with this property, also known as Sherwood. 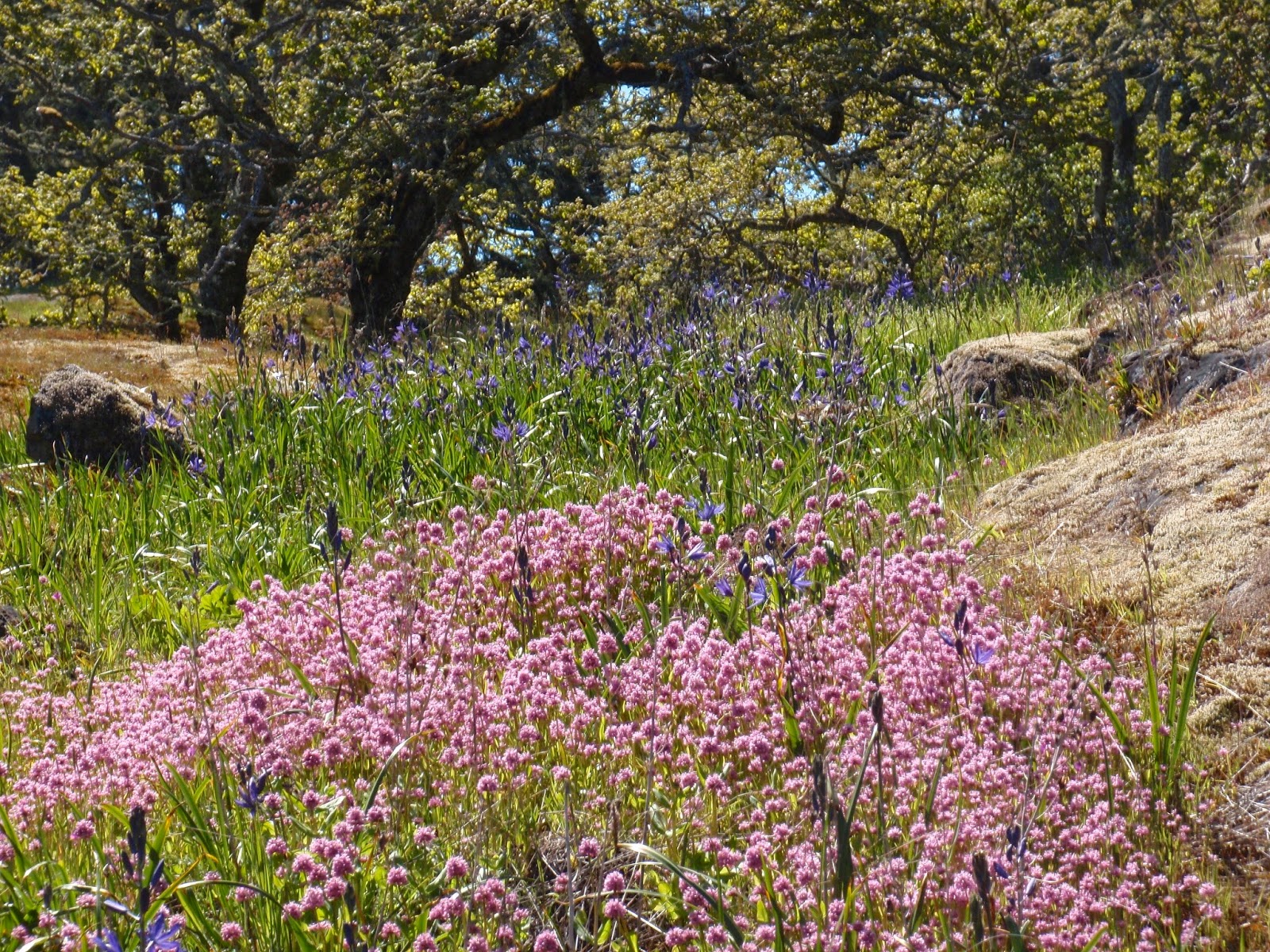 Have you wondered where the name Devonian came from? You would not be alone if you thought it had something to do with the Devonian period of history, a time defined as “the geologic period that extended from 410-360 million years ago, when forests and amphibians first appeared and fish became abundant”. In fact it refers to the Devonian Group of Charitable Foundations of Calgary, which supports “preservation of history; creation of public parks; and scientific research.
In 1979, the Devonian Foundation purchased 100 acres of Sherwood (the section of land below William Head Rd) from the Helgeson family and in 1980, they donated 2/3 of the purchase price of the piece now known as Devonian Park. The provincial government provided the remaining one third of the cost. In 1983 the CRD purchased an additional 2.2 ha to provide access along the bridle trail, giving the park a total of 15.8 ha or approximately 39 acres.
Rising 35 metres from Parry Bay to William Head Rd., Devonian Park offers a variety of natural habitats. Originating in Ali Pond, Sherwood Creek, home to our native searun cutthroat trout and threespine sticklebacks, has cut a shallow valley through the landscape. Please observe the signs and a split rail fence that have been erected to preserve the spawning habitat. Sadly, the creek is not as healthy as it should be, suffering from excessive erosion and possible coliform contamination. Do not drink the water! Perhaps the future will bring a restoration plan to this area. The creek flows into Sherwood Pond and marsh, a staging area for migrating waterfowl and home to many species of birds and plants. Springtime brings the raucous territorial calls of the red-winged blackbird with its adamant “conk-o-reee-ah” filling the air. Occasionally you can glimpse a playful river otter family slipping into the pond from the beach.
Taylor Beach, from its southernmost end by a rocky promontory to an area near Sherwood Pond is considered a “Class 1 berm beach with a steep foreshore”. The stable back berm or embankment reduces erosion potential and is populated with driftwood, dune grass, trees and shrubs. It is a wonderful spot to enjoy the panoramic views of the Olympic Mountain range in Washington and provides excellent opportunities to see marine life. We are often rewarded with the sight of a sleek seal head with their “velvet painting” eyes. It sometimes seems that the seals are out there watching our antics on the beach, rather than the other way about!
The interior of the park and over to the southern boundary, along the bridle trail, has some awesome, fire scarred Douglas-fir specimens, not quite ancient growth, but nevertheless about as large as still can be found. Here, in the late winter to early spring, just before dusk, you can sometimes find great horned and barred owls, resting before their evening work, the field to the south of the park provides prime hunting grounds. Delightful patches of fawn lilies, one lonely trillium and some gorgeous flowering currants occur in the drier sections of the forest. This past month there has been bear scat seen near the bridle path. Seems the bear is enjoying someone’s apple trees!
Where there has not been too much disturbance, the riparian area of the creek is thick with salmonberry, sword ferns and Indian plum with their very early chartreuse leaves. Here winter wrens flit close to the ground, from log to shrub, occasionally proclaiming their presence with a high pitched kip-kip, often inaudible to those of us with failing faculties. Many hours have been spent successfully removing the evergreen Daphne laureola or spurge laurel from throughout the forest area, where it was invading.
Unfortunately there are always some people who think that restrictions in the park do not apply to them. At least one person on a mountain bike has repeatedly used a steep section off trail as a challenge to their biking skills. This has resulted in severe erosion that will, this winter, add excess sediment to the creek and spawning areas. There is also someone else who thinks it is their right to develop new paths throughout the park. These soon become much used trails. No matter how many times debris is piled to divert the new “trail” usage, someone pushes it out of their way. It is one of those times that someone’s idea of park usage conflicts with CRD Parks goal to “provide a balance between recreational use of the site and its natural resources”. Each new path significantly fragments the park and reduces habitat for wildlife. Please stay on designated trails. 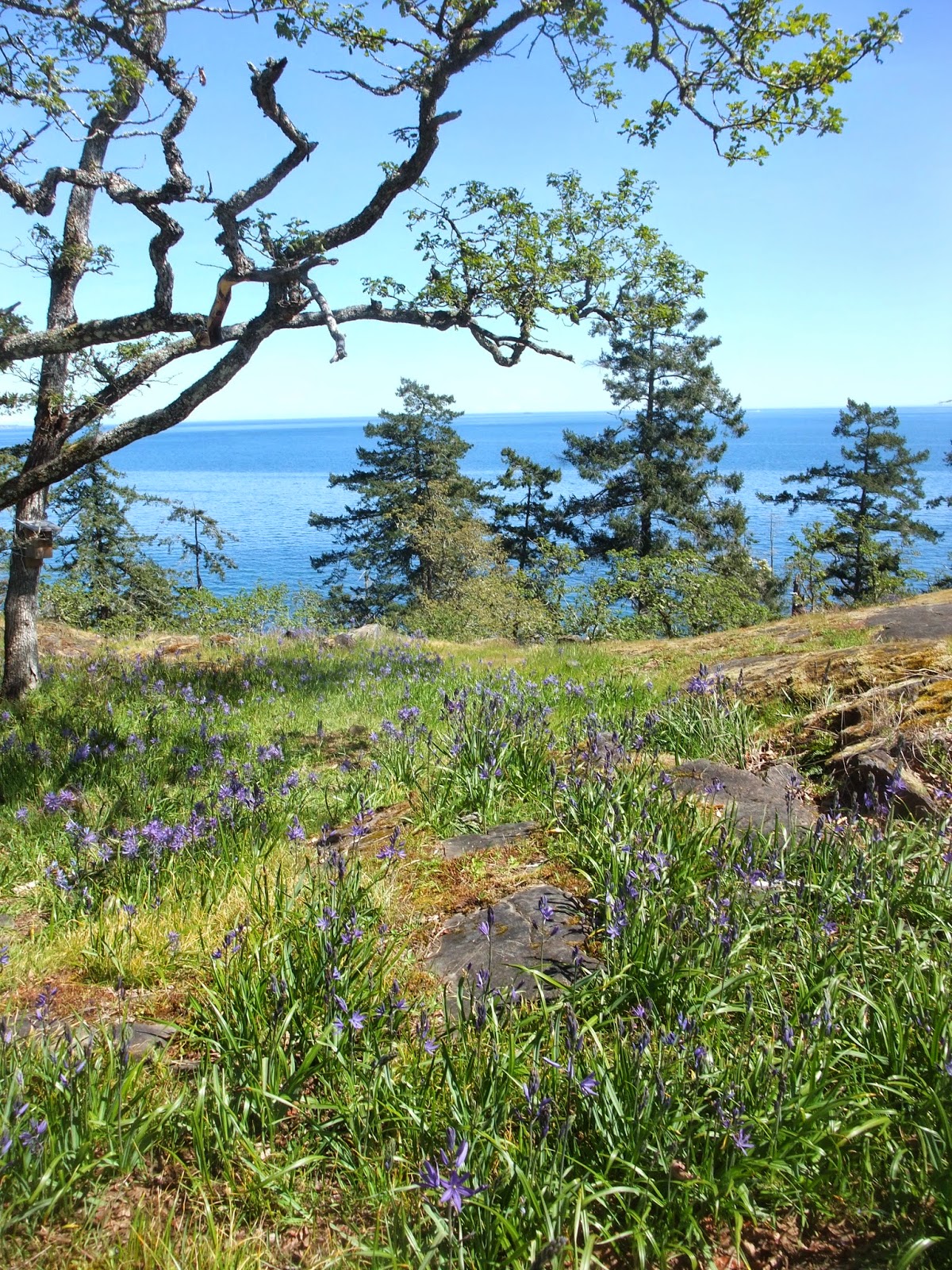 On the southern side of the park are the remnants of volcanic action in the form of rolling moss covered hills. These are disturbed Garry oak ecosystems on thin soils with moss and lichen crusts. These moss balds are easily destroyed by even casual use. It takes a thick cover of moss to protect the spring flowering bulbs beneath. Home to some of our rarest plants, it is here that an ongoing restoration project is happening. Years of inattention have contributed to a far too healthy population of broom that is displacing our native species and reducing the biological diversity of the site.  To date close to 3800 hours of volunteer labour have been expended in broom removal and these ongoing efforts have contributed to an increase in the spring flowering plants that so define our Metchosin sensibilities. Of course, broom doesn’t stay gone, it has an annoying and very successful strategy of regeneration. In addition to the imperative to remove the rest of the broom, there is also a need for continual vigilance to spot and eradicate new broom seedlings. 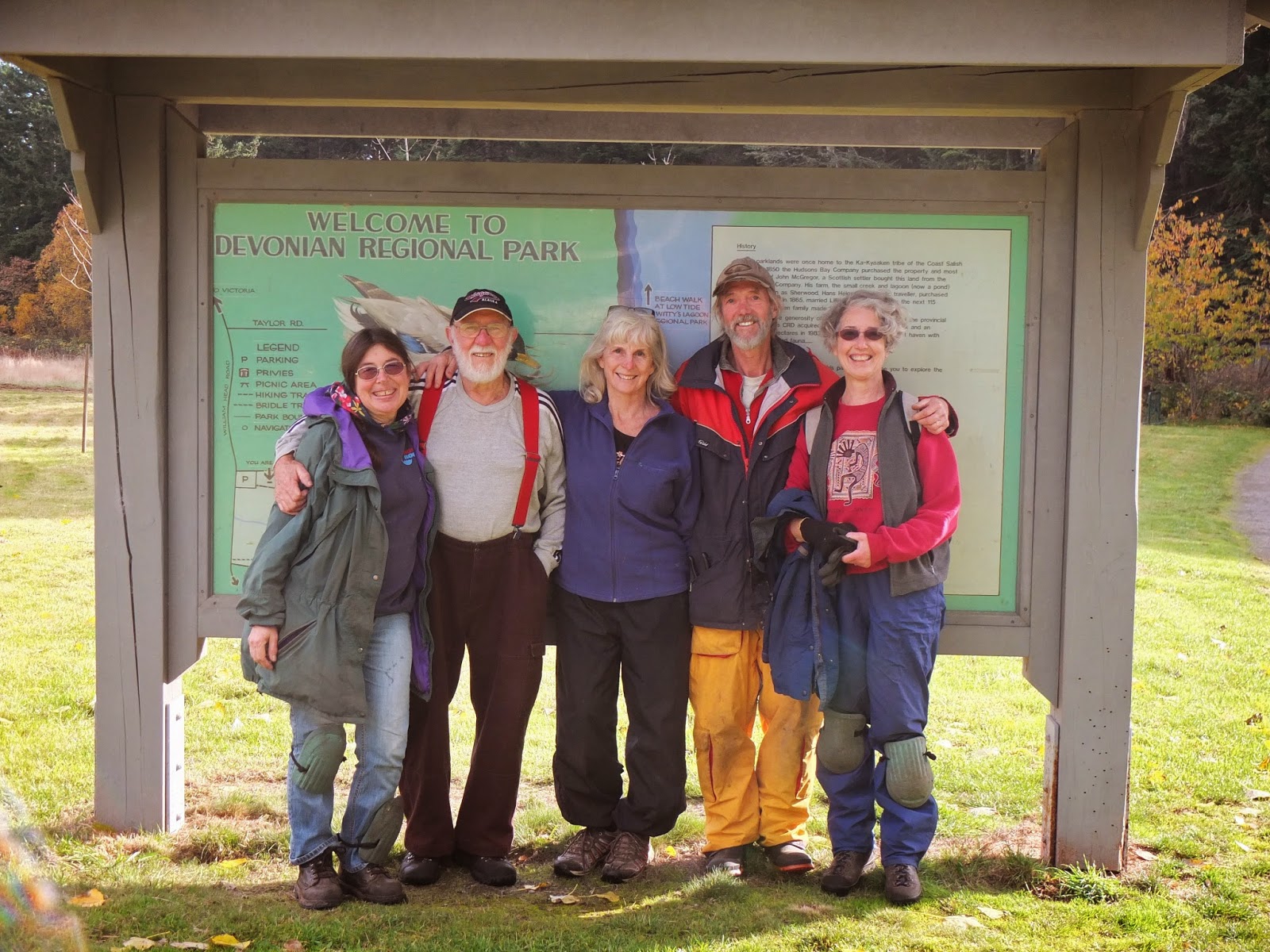 Volunteers are always needed and every Sunday from November through February an enthusiastic group meets to do battle with broom. If you are a park user and have some time and energy to spare, you might consider becoming involved. As my grandmother used to say “many hands make light work”. As I remember, my grandmother would say this and we would roll our eyes and think “yeah right”! Now I am the grandmother expounding these little homilies! Unfortunately there is not enough money in CRD Parks budgets for all the activities that we require of them. Volunteering for Parks is a way to help make things happen and be involved in your community.
Please contact Moralea Milne at 478-3838 or moraleamilne@gmail.com if you wish to participate.

References. Any inaccuracies are my own.

I just stumbled onto this site - its great! Thanks for steering folks towards me, my email address is now: dmathews@uvic.ca