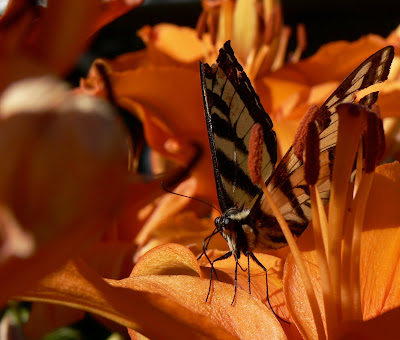 Western Tiger Swallowtails use Maples to Raise their Caterpillars 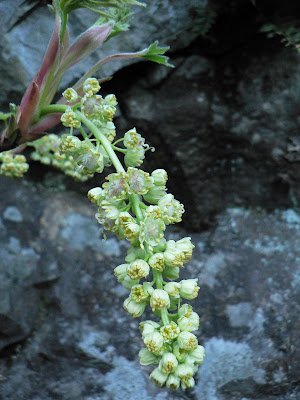 Wandering through the parks and along the roads of Metchosin in early April, you will find our native bigleaf maples in full but subtle bloom. While still bare of leaves, their profuse, pendant clusters of yellow-green flowers whisper that it is spring. Later, their paired, winged seeds float from the branches like legions of miniature helicopters.
The bigleaf maple is a long lived (200 years), fast growing, often multi-stemmed, hardwood tree of the west coast that can reach 35 metres in height and an equal distance in spread. It thrives on the rich, moist soils found along streambanks or in seepage areas. The lightly furrowed trunk on an ancient tree can reach 3 metres in diameter and it has the largest leaves of any maple in the world, often the size of a dinner plate.
Scientists and environmentalists often speak of ecosystems, defined not so simply, as a “localized group of interdependent organisms together with the environment that they inhabit and depend on”. Many of us in Metchosin live within the unique and endangered Garry oak ecosystem. But did you know that a single bigleaf maple can be an ecosystem unto itself?
The calcium rich bark of an old maple or one growing in shady conditions, can be adorned in mosses, lichens, liverworts, ferns, bacteria and fungi, virtually obscuring the trunk and branches. The three most common mosses found on a bigleaf maple are yellow moss (Homalothecium fulgescens), rough moss (Claopodium crispifolium) and Lyell’s bristle moss (Orthotrichum lyellii). It has been reported that the weight of all these accessory plants can equal four times the weight of the leaves. Living within these well clothed areas can be countless insects and spiders, even earthworms inhabit the soil that builds up in the crotch of branches and under the mosses. The thick accumulation of maple leaves under the trees seems to provide ideal, cool, moist habitat for frogs and salamanders and the calcium in the leaves makes available good quality food for snails such as the Pacific Sideband, our largest land snail and for the endangered Oregon Forestsnail.
The weight of waterlogged mosses can cause huge old branches to break off and the resulting damaged areas are attacked by bacteria and fungi. These produce soft rots which allow woodpeckers, nuthatches and chickadees to create cavities for other creatures to use and inhabit. The seeds, buds and flowers are consumed by small mammals and birds; bees and butterflies flock to the nectar laden flowers; while deer find the twigs an acceptable browse. One of our largest and most beautiful butterflies, the western tiger swallowtail, uses bigleaf maples as a host plant for its caterpillars.
Ecologically, bigleaf maples are able to withstand floods and they are adapted to survive fires by resprouting, enabling the landscape to recover more swiftly from these disturbances.
First Nations peoples named the bigleaf maple the paddle tree, as its wood was used to fashion canoe paddles and other implements. The fiber from the inner bark was made into rope and baskets or dried and pounded into a powder for use as a thickener in cooking. The close grain and moderate hardness of bigleaf maple wood make it ideal for furniture, veneer, interior finishing, and musical instruments.
Our maples have a lower sugar content than their eastern counterparts but apparently the taste of the syrup is at least as good, if not superior. There are often workshops held in January on the fine art of tapping maples, usually presented through Malaspina College or the Nature Conservancy at their Wildwood Forest site. The barely opened young flowers are edible and said to be sweet, they are a good addition to salads, the taste is rather like raw broccoli. Older flowers though become somewhat bitter.
Their rapid growth and drought tolerance make our bigleaf maples good candidates for shade trees. With their gorgeous spring blooms, their fall colour that has been described as a “blaze of yellow glory” and their value to wildlife, they offer many reasons to plant them in your yard. Give them some room to grow and a modest amount of supplemental water and soon your home will enjoy the shade supplied by nature’s air conditioner. However, exercise caution and plant them away from your septic system or the fast growing roots might block the field.
Posted by Moralea Milne at 11:45 PM