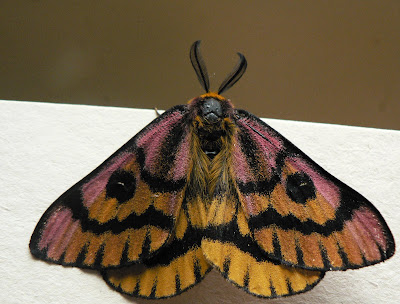 SHEEP MOTH
Sept 14, 2006
Moralea Milne
One of the things that is the most rewarding about writing articles for the Muse is the feedback from people who have something of interest that they want to show me in the hope I will share their excitement and interest. And I do! Several times lately I have had occasion to visit a nearby home and discover something new and fascinating. One was the unexpected scorpion at the Wessels’ home and another was an exquisite sheep moth that had been rescued from the grill of a car by a Metchosin resident. A Halloween mixture of black, orange and pink, the 2 ½ inch moth with it’s feathery antennae is a reputedly common (I’ve never seen it before) day flying moth of the silkworm family. This species of moth will overwinter as an egg, spend next year as a caterpillar feeding on snowberry and members of the rose family (don’t touch the caterpillars-those spines can sting!), overwinter again in it’s chrysalis and finally emerge in all it’s mothly glory the following summer to breed and die. The adult moths have taken a decidedly different evolutionary tract from most other creatures, focusing on procreating to the point they have evolved without the ability to eat in their last life stage as a moth. They have no mouthparts and only live a week or two after emerging from their cocoons. But their beauty, while around, is incomparable.
Posted by Moralea Milne at 12:26 AM