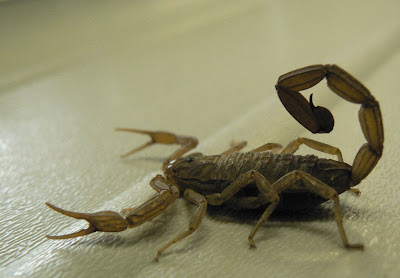 Taxes and scorpions make strange bedfellows.
Going through your tax papers is not an activity most of us would find very exciting, but for Johan Wessels, of Galloping Goose Sausage Co fame, it brought both excitement and a surprise guest.
No, the taxman has not taken up residence, but as Johan was rummaging through his papers in July, an unusual and somewhat alarming visitor made it’s presence known by falling onto his lap. Perhaps it hitchhiked in a box of Okanagan fruit or stole a ride in his son’s truck, returning home from Alberta. Scully, a Northern Scorpion, however, is remaining mute on that issue.
Northern scorpions, looking like miniature lobsters with an attitude, usually reside in the hot, dry, south facing hillsides of the Southern Okanagan and Alberta. Their upturned tail comes equipped with a poisonous stinger that can cause pain and swelling much like a hornet’s sting. Active at night, they feed on spiders and other small insects, by day they hide under rocks and bits of bark. Live-born young spend the time before their first molt riding on their mothers back. They take up to 5 years to become adults and can live up to 25 years.
Not particularly common even in their natural habitat, in Metchosin it is one of a kind! Scully is living comfortably, though caged, in his new home, being fed various insect delicacies by the Wessels family.
Sad news reached me late in 2008 that Scully had passed away. Strangely enough, the family had become quite fond of their unusual housemate and he is missed.
Posted by Moralea Milne at 12:27 AM