The Lives and Good Times of Northern River Otters 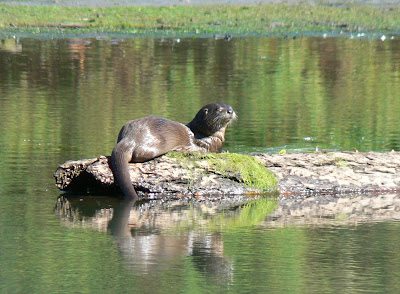 One of the most wonderful and memorable sights I have experienced was during a typical wet and chilly west coast day. With rain soaking through my clothes and water dripping off my nose - while remaining absolutely still - I watched entranced as a small group of three coastal river otters frolicked over and under logs at a creek along the shoreline of Parry Bay, Metchosin. For half an hour they chased each other, sliding into the creek, swimming under the logs and pouncing on each other for the sheer joy of the game. Only uncontrollable shivering and incipient pneumonia released me from viewing their playful antics.

Like watching youtube videos of cute kittens or listening to babies laugh, river otters make me smile, and I am delighted to find out that they are just what they seem, a group of otters out for a good time. Otters love to toboggan and slide on the stomachs - across ice or snow and down muddy banks. They dive for pebbles they throw in the water and they play with sticks and bits of floating flotsam. All this play is apparently the result of efficient foraging techniques that free up lots of disposable time.

Coastal river otters (Lontra canadensis) have not been well studied and new evidence is emerging about their habits, which are markedly different from their interior relatives. The dynamic environment in which they live and their ability to forage in both marine and fresh water, provides them with many food options. Most of their food is comprised of slow moving intertidal species such as sculpins, gunnels, rockfish and crabs, although they will eat almost anything, even blackberries have been observed as part of their diet.

The latest theory on why some otters congregate into groups is that they can then hunt fast moving prey more efficiently. Three otters have been observed dragging a large halibut onto the shore, a meal that a solitary otter, hunting alone, would be unlikely to acquire.

Although coastal otters spend much of their time in the marine environment, they need access to fresh water every day. Natal dens, where the young are born, are often located far from shore. One to six young (but usually only two to three) are born in late spring after a three month gestation, they are born blind and helpless and remain in the den for a month or more. They stay with the mother for half a year and sometimes until the next litter is born, as she teaches them hunting skills. The natal dens are separate from the regular den sites, which might hold a group of unrelated otters.

Outside the den, which can be found by following your nose, is a latrine. It is estimated there are latrine sites every 200-300 metres from Pedder Bay to Cadboro Bay. Otters use many communal latrine sites, which seem to function as an information exchange, where many aspects of an otter’s life is on olfactory display: from profiles on sex, age, kinship and status to territorial signals and foraging success as well as warnings to stay away or welcoming invitations. With continual status updates, the latrines serve as an otter’s version of Facebook.

Coastal river otters are the top predator in their environment and as such they maintain the ecological stability of that system. When a top predator is removed from a system, a drastic imbalance can occur. When cougars and wolves are gone, deer populations can increase to unsustainable levels and excessive amounts of vegetation can be destroyed, which can lead to further system instability (erosion for example). When sea otters were exterminated, sea urchin populations increased dramatically and they decimated kelp forests, which had been critical nurseries for juvenal fishes.

River otters along the Pacific Northwest coast are the only stable and healthy populations left on earth. Habitat degradation has been the major cause of decline, especially from pollution. Cait Nelson a masters student at UBC, has been studying the coastal river otters in this area, determining the impacts of the PCB polluted waters of the Victoria Harbour on their health. Her work focuses on the effects of PCB contamination on the otters, through study of the level of toxins in their systems, their genetics and stress levels. The research is done in a non-invasive manner by studying their feces, from which they can extract DNA. Already she has found that their home range is much smaller than was previously thought. Some otters stay within the harbour all the time and other otters along the coast might have territories of three to six km. This is markedly different from inland otters who must travel much farther, as food resources are less abundant.

Although otters can be a joy to watch, they are a smelly nuisance if they discover the perfect denning site under your house. The best way to protect yourself from sharing your home with otters is to wildlife proof your house before they arrive. At Albert Head, where there is an abundance of natural habitat, they still seem to prefer the comfort of urban living and den under some of the buildings.

Coastal river otters have been successful because they are a generalist species. As well as having the awww factor, they are adaptive, resourceful and flexible. Sometimes this leads them into conflict with people as they discover free fish at marinas, as they harvest crabs from traps and as they set up latrines on decks, and dens under buildings.

These charismatic and playful predators just want to have a good time and we can help to protect these important sentinels of ecosystem health by respecting the fact they are wild animals and by protecting the environments which sustain them.

Posted by Moralea Milne at 6:27 AM