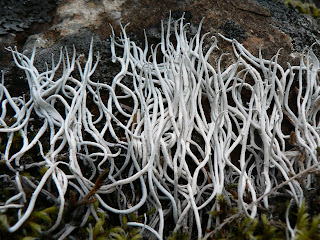 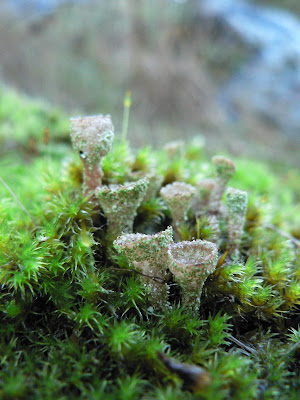 Walking through the mist shrouded hills in the wet, winter season provides a wonderful opportunity to appreciate the rich, vibrant tapestry of mosses and lichens that cloak the landscape. The number of variations of green, brown and white are astounding, and the diversity of textures, from a velvet smoothness to intricately branching sculptures, to rock hugging crusts is exceptional; surely an artist has been at work.
Lichens are a remarkable adaptation of nature, a combination of a fungus and an algae or in some cases a cyanobacteria (formerly known as blue-green algae), who co-inhabit and create a new form of being. They have a mutually beneficial relationship (symbiotic) whereby algae supply nutrients otherwise unavailable to the fungus and the fungus provides a home and protection from a harsh environment to the algae. Renowned BC lichenologist Trevor Goward considers that "Lichens are fungi that have discovered agriculture”.
Are lichenologists born with a creative streak or does their intimate relationship with these strange and wonderful plants stimulate newfound abilities? Consider the names they have given to lichen species: Questionable rock-frog, lipstick cladonia, coastal reindeer, waxpaper, tickertape bone, antlered perfume, fishnet, devil’s matchstick, waterworm, blood-spattered beard, witch’s hair, lettuce lung, false pixie cups…… playful and suggestive, you’d almost think they sat around the bar one long night, inventing names, each more amusing than the one before.
Lichens can grow in the most extreme areas of our planet, albeit very slowly. From the High Arctic to Antarctica, from deserts to ocean shores, some species have been shown to be able to survive temperature extremes, ranging from +100C to -196ºC. The only place you won’t find them is in subterranean caves where there is no light, the algae component need sunlight to photosynthsise and produce food. They are the first species to colonise bare rock, beginning the long process of building ecosystems. They don’t have roots, they take their nourishment from the air, living on trees and shrubs, often high in the canopy, never harming their hosts. They can be found on glass and metal left out too long in the unforgiving elements.
Lichens have served the environment and people well over the millennia. They are an important component of desert and semi-arid ecosystems, partnering with mosses, algae, fungi and other hardy and miniscule plants to form a microbiotic crust that protects the dry landscape from erosion.
They contribute to invertebrate diversity in forests, they supply nesting and camouflage material to birds and insects - lichens are woven into a hummingbird nest, making it almost impossible to find. Lichens are nitrogen fixers, supplying a much needed source of nutrients to enrich forest health and productivity.
Fifty percent of lichens have been shown to have some antibiotic properties. Across many cultures, Usnea species, the “beard” lichens, have traditionally been used to treat wounds. Old Man’s Beard is one species of Usnea that can be found in our woods, it can be distinguished from similar looking but different lichen species by a central white cord that runs through all Usnea species. In “Plants of the Pacific Northwest Coast”, it is recommended to “slowly pull the lichen lengthwise like a party cracker”, if it is an Usnea species, there will be a tough, somewhat elastic central cord. Being able to recognize these lichens can save your life. If you cut yourself while hiking far from medical services, grab some Usnea and apply to the wound, it is supposed to have antibiotic, antioxidant, antifungal and absorbent properties that can help combat infection until you can get medical assistance. Usnea is purported to be helpful in treating a range of medicals problems: respiratory and urinary conditions; yeast infections, herpes and in treating HIV and it supposedly supplies long term immune system benefits.
Lichens are the subject of research, especially in Japan, for their medicinal qualities. Some lichen species have been used as food, especially during famine times, they are made into soups and flours; generally they have low protein and high carbohydrate levels.
Punctured rock-tripe produces the scarlet colour used in some Scottish tartans while speckled horsehair and waxpaper lichens produce yellow and brown dyes. Wolf lichen, so named because of its alleged ability to poison wolves, was a valuable trading commodity between Interior and Chilkat First Nations-who used it as a yellow dye in their blanket making. Antlered or oakmoss perfume is a slow-growing (2mm/yr) lichen, commonly found on trees and shrubs throughout our Coastal Douglas-fir region. It has long been used as a fixative in the production of perfume.
Lichens are very susceptible to pollution and are being used as environmental indicators by scientists monitoring air quality; alder trunks are usually festooned with lichens but downwind of a pollution source the bark can be bare, indicating problems that can affect the rest of us; they act as our canary in the coal mines. They perform like organic sponges, absorbing radioactive pollutants at high rates, analysis can then show which pollutants are in the air. This doesn’t bode well for the many species of animals that use them for food, who can ingest high levels of contaminants. Studies have shown that some wild meat can have ten to one hundred times the levels of contaminants as farmed beef.
Lichens are strange and fascinating organisms which exhibit remarkable properties. Beyond their own intrinsic values, they hold the promise of exciting medical and monitoring advances. Next time you are outdoors, here in Metchosin or elsewhere, check the bark on alders and see what it can tell you about the air quality in your neighbourhood.

Fill a jar of your choice with Usnea (the more freshly harvested the better, although this plant contains so little water that it's hard to distinguish fresh from dry).

~ Pack the jar full, but not crammed. Then fill the jar again with 100 proof vodka.

~ Make sure the alcohol totally covers the plant material.

~ Label your jar with the date and contents and cover it with a lid.

~ Let it sit in a cabinet for six weeks (feel free to open it up occasionally and taste it). It's not necessary to shake it.

~ After six weeks strain off the liquid, compost the Usnea, and pour your extract back into the jar. It will have turned brownish-orange.

~ You can pour some into amber dropper bottles for easier use.
Posted by Moralea Milne at 9:36 AM