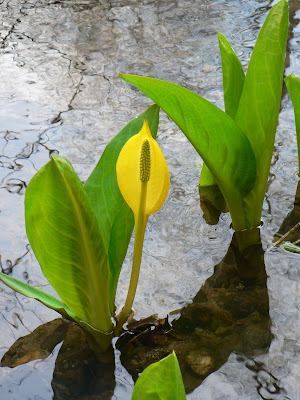 
Through the damp mist, glowing like a brilliant yellow beacon, the swamp lanterns rise from the wetlands and swamps to announce the rebirth of the landscape; what a wonderful sight for eyes tired by unrelenting grey skies. More prosaically know as skunk cabbage, this tropical looking member of the Arum family is one of the first plants to appear in March, or April if you have a cold winter such as this year. The eastern species can generate heat more than 30ºf warmer than its surroundings, melting ice and snow to emerge. Our western species (Lysichiton americanum) does not have (nor need) this ability but it has a few tricks of its own up its spadix.
The first scent, often overlooked, that is emitted from these harbingers of spring is a sweet, coumarin-like fragrance (coumarin produces a scent similar to new mown hay). Enticed by its flag of brilliant yellow and the “come hither” alluring scent, the winged rove beetle (Pelecomalius testaceum) arrives to feed on the pollen and in doing so, transfers the pollen so that the plant is fertilized. After gorging themselves at the pollen banquet, the beetles satisfy further primal urges and mate, retreating to the protective and hidden base of the spathe (yellow encircling leaf) and spadix (clublike stalk with hundreds of miniscule flowers). The skunky smell for which it is renowned comes later, when the flowers have wilted and the leaves are more fully developed.
The thick, fleshy roots are eaten by bears, and elk and deer browse the young leaves. This is an example of when you should not consider something safe to eat because animals eat it, seemingly with impunity. The plant contains crystals of calcium oxalate (also found in rhubarb leaves), which will cause intense burning, irritation and swelling if ingested. It was eaten in times of famine but only after thorough cooking.
The immense, almost tropical looking, verdant green leaves can grow to 1.5 metres and were used by many First Nation people to wrap food for steaming, apparently no odours were imparted to the foods. They were also handy for lining baskets for the berry harvests and in the cooking pits. Some First Nation communities used the leaves as a poultice for burns and injuries.
As their name suggests, swamp lanterns grow in swamps, where the soil is rich in nitrogen and usually has slow moving groundwater near the surface. They are usually found in association with red alder, western redcedar and lady fern.
Europeans have been renowned for centuries for their plant expeditions and for bringing new plants into their horticultural trade. Swamp lantern is one such plant that has been celebrated for its beauty and peculiarity and planted into European gardens and into natural areas “to enhance native flora”. To be fair, most of this was before the concept of invasive plants disrupting ecosystems was even a gleam in a scientist’s eye. Swamps are rare in Central Europe and now they are under attack from the invasive onslaught of our swamp lanterns which have successfully bullied their way into these habitats, shouldering aside the native flora. An ironic reversal of the usual direction of invasive species; many of our most common alien invaders have come from Europe and Asia.
Whether you call them skunk cabbage or swamp lantern they signal the rebirth of spring and the promise of sunny days ahead.